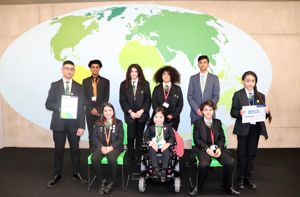 Westminster Academy has been awarded the British Council’s prestigious International School Award in recognition of its work to bring the world into the classroom.

The International School Award celebrates the achievements of schools that do exceptional work in international education. Fostering an international dimension in the curriculum is at the heart of the British Council’s work with schools, so that young people gain the cultural understanding and skills they need for life and work in today’s world.

Westminster Academy’s international work includes a range of exciting connections with other schools around the globe. Last year the Academy partnered with Kelihua School, China and hosted students for a week. Year 12 IB Languages students have taken part in several international visits to gain an appreciation of foreign languages and different cultures, including a homestay in Nice. Students also took part in a fascinating Skype activity, connecting students with teenagers in Hiroshima, Japan, to find out about the impact of the Hiroshima bomb in 1945, as well as share cultural insights.

On hearing the news that Westminster Academy had received the award, Principal, Dr Rana, said, “I am delighted to see the work of students and staff recognised with the International School Award. Now more than ever, it is imperative that our students grow up with the global insights and cultural understanding that will encourage them to make a positive impact on our world. By bringing an international perspective to the curriculum and broadening horizons through a multitude of connections, we are proud to see our students develop curiosity and a sense of social responsibility about the world around them.”

Sir Ciarán Devane, CEO of the British Council, said, "The school’s fantastic international work has rightfully earned it this prestigious award. The International School Award is a great chance for schools to demonstrate the important work they’re doing to bring the world into their classrooms. Embedding an international dimension in children’s education ensures that they are truly global citizens and helps prepare them for successful lives and careers in an increasingly global economy."

The award, which celebrated its 20th Anniversary last year, is now available worldwide in countries such as India, Sri Lanka, Egypt, Lebanon, Nigeria, and Pakistan. Over 6000 International School Awards have been presented to successful schools in the UK since the scheme began in 1999.

The International School Award encourages and supports schools to develop:

WA come together for interfaith Iftar