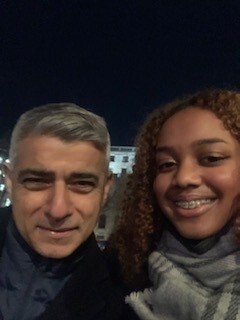 and I volunteered to promote Westminster Befriend a Family (WBAF) as ‘young ambassadors.’

I used to be mentored in Year 11 which was highly beneficial for my academic success. Now, I go to events and workshops to discuss my positive experience to encourage more children to join the scheme, and to encourage people to donate.

WBAF was selected as the Westminster charity of the year, and as a result, is promoted at many of the Lord Mayor’s events such as the Christmas tree lighting, which we were fortunate enough to attend.

The event involves a tree from Oslo being lit in Trafalgar square: a tradition symbolic of England and Norway’s friendship after helping each other in WW2.

There was a pre-event in a hall which felt very posh. I was quite nervous to talk to such established people like the Mayor of Oslo and Norwegian ambassadors, but I ended up quite surprised at my confidence once I got used to the environment.

Everyone was very kind and It was intriguing to talk to mayors from different London boroughs: Sadiq Khan came at the end of the pre-event and I felt so excited to see him - he congratulated me for getting involved in such events as a young person.

To travel from the venue to Trafalgar square, Taha and I walked with Sadiq Khan’s security and entourage - it was all very VIP. When I was on the stage, the lights and cameras were so bright that it distracted me from the 200 people standing in front of me. We had to read out letters from the children in Oslo which were adoring and hopeful.

To hear my voice coming out of the speakers was very impactful; it felt like a reminder of everything I have achieved up to this point, and what I might accomplish in the future. I felt proud on the stage representing young, black women like myself. I was surprised at my confidence - normally I am very awkward, but this event has made me realise that the two are not mutually exclusive. I am very awkwardly confident!

Afterwards, we did a countdown and turned on the Christmas lights. I felt powerful and happy. I came home with a feeling of growth and disbelief with what I achieved that evening - I got involved in such a meaningful, special event by taking more CAS opportunities!

Joy, relief and highest ever IBDP average on results day