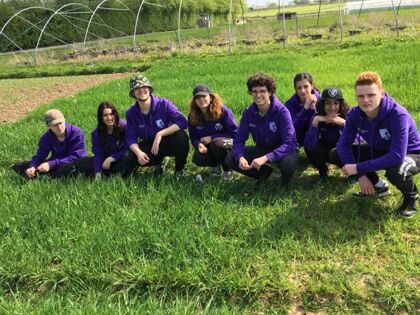 Two weeks ago a group of Year 12 students received an incredible opportunity to learn about agricultural careers on a residential at Harper Adams University, supported by the Careers Office and BBC Countryfile.

Students experienced an immersive two days in the countryside, with activities such as moth catching, sheep body scoring, observing milking, learning about soil,  and robotics in agricultural engineering. They also attended a careers talk and took a campus tour. Not only this, but the experience was filmed by BBC Countryfile for one of their upcoming programmes! The presenter, Adam Henson, was kind and engaging and made it a really enjoyable visit. Our students tell us more...

Antonio: The trip was one of the greatest opportunities I have had with the school. Going to the countryside and exploring the many careers in agriculture was definitely surprising, especially living in a city for my entire life. I felt like I learned a lot about how food reaches our plates and I was also able to have fun while doing it. Getting recorded by the BBC was very interesting and you could really understand how TV shows we watch are made; there was a certain shot for which we had to do the same walk about five times. Overall it was an incredible experience and it's very exciting that we will be able to watch it again on television.

Sven: The farm trip was very engaging right from the start, but the best thing about the trip was the second day when we were taken to see the sheep and learn how to catch, examine their teeth and eventually flip the sheep. Later on that day we examined the hundreds of bugs in the soil we dug up, learning about different species like worms, lice and nematodes which proved to both be interesting and extremely creepy.

Eran: The trip to Harper Adams was not only a thoroughly enjoyable experience, but an experience that opened my eyes to the vastness of opportunities in the agricultural industry. Through our time spent on the farm, I was fortunate enough to meet and work with not only farmers but lecturers, engineers and entomologists, and witness just how broad and fascinating the world of agriculture is.

Raneem: The experience at Harper Adams University was surprisingly one of the most fun things I have done this academic year. I was looking forward to it, however I was not expecting it to be as spectacular as it was, probably because I have spent the whole 17 years of my life living in a city. One of the first things I noticed was the smell of the air - it was unbelievably clean. I don’t think I have ever noticed how polluted London air is before. The only downside was the stench of the farm animals, especially the pigs, but none of that matters when compared to the cuteness of the animals. My favourite activity was catching and flipping the sheep. I found it so difficult but I was laughing the entire time because I found it so hard to actually catch a sheep.

Marya: We had the best time at the university, with amazing accommodation, catering, and staff/crew. From the moment we arrived we were taught new and useful skills that I will never forget. Personally, my favourite part of the trip was either the nocturnal walk where we were able to witness real life bats inhabiting the farm but also the sheep activity where we were able to get up close and personal with the animals and learn how to handle them. One thing that did surprise me was the fact that I really enjoyed observing the soil and the organisms that lived in it. I have a fear of bugs, but being so close to them really helped me overcome my fears. In addition, being able to meet BBC star Adam Henson was such a cool experience and being able to learn from him and be taught about his personal journey to success really inspired me to stay motivated and educate myself on the sourcing of our food and the improvements being made in the agricultural sector. I never would have expected myself to want to work in anything remotely related to farming but this trip really changed my perspective and I am so thankful to have been able to attend.

Aya: The best part of the residential was most definitely the sheep experience. First of all, I would have never thought I would be making a sheep sit down whilst its 4 legs are sticking out. That was fairly mesmerising. I learnt how farmers catch sheep which was the best part because not only did we do a lot of hands-on activities, but we learnt a lot along the way. For example, did you know that in order to capture sheep you need to corner them and grab them from right underneath their chin? Did you also know that if you touch the sheep's tail, it wiggles? Anyway, catching a sheep is more intense than you would assume. It took me and others 5 female sheep to finally get one that we could then sit on the floor and inspect. You can inspect whether or not they are healthy or old just by looking at how many teeth they have and also if you feel their back and you can feel their rib cages, then it means they’re healthy. This is because the more meat it has, the heavier it is.

I also don’t want to sound cliche but the other best part was definitely being given the mic and being filmed by the BBC. I mean as someone who loves to talk, this required no effort at all.

Overall, I learnt a lot about what goes on behind the milk we drink, behind the fruits we eat, behind the scientific studies, what’s actually underneath the soil, where our vegetables come from and much more. It made me appreciate the workers a lot more because a lot of strength, patience, passion and determination goes into the agriculture side of things. Thank you to the staff members there because they were really nice and welcoming and always thought to provide us with snacks constantly. That was very nice :)

Matthew: After visiting Harper Adams University, what seemed like such an obvious choice of me not going to university became more of a possibility as I got to experience first hand what life in university is like and at the same time, have the opportunity have my questions about uni answered by kind and informative staff. It was a much more rewarding experience than I expected. 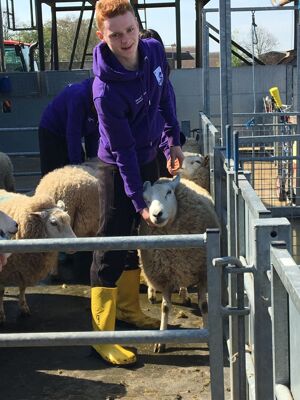 Malachy: I really enjoyed the whole trip overall. My favourite activities were the first session with the sheep and working with the robots. I had never seen a sheep up close before and it was fun trying to catch the sheep in the pen and stop them escaping. I enjoyed the sessions working with the robots as it is so extraordinary seeing what technology can do. It was fun racing our robots at the end and trying to get them to arrive at pinpoint coordinates.

Mr Herbertson added that it was “the best school trip” he has been on during his years at WA. He also received the following feedback from a Student Ambassador at Harper Adams: "It was a genuine pleasure to work with you and the students. They are an absolute credit to the Academy. Academics have all commented on how well engaged and enthusiastic they were in all sessions. We couldn’t have asked for more". We would like to thank the Careers Office and everyone at Harper Adams University and BBC Countryfile for their care and for making it such a memorable visit.

WA comes together for interfaith Iftar